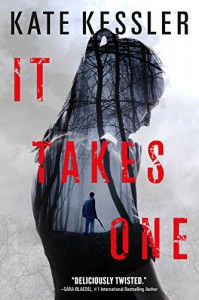 Continuing with the theme of 'murder murder murder' I picked up It Takes One by Kate Locke which is a psychological thriller taking place in a small rural town. (Looking at the descriptions of some of Locke's other books it seems like 'small town murder mystery' might be a specialty of hers.) Audrey Harte is a criminal psychologist who is frequently asked to lend her opinion on true crime shows where a professional analysis is required. Unbeknownst to her colleagues, she has a dark past that she's been trying to leave behind for years. You see Audrey murdered her best friend's father when they were kids and spent several years at a juvenile facility for violent girls. O_O So when she goes home for the first time in several years and a body turns up...you can imagine where the fingers start pointing. Now Audrey has to find the killer before either she's found guilty or dead. I will say that when you find out whodunit it is a SHOCK to say the least.

This is the first in a series featuring Audrey Harte as the main character but I think I've probably had my fill after reading this one. (She's not particularly likable if you want my opinion and the explicit sex scenes are not my cup of tea.) A surprising ending doesn't override the fact that I've read better psychological thrillers. 5/10

What's Up Next: The 7th Victim by Alan Jacobson