What if they had used The Body Back on Spock? 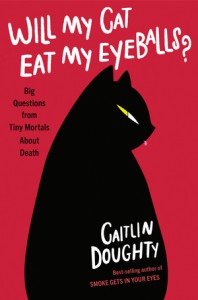 Answering questions posed to her from kids while touring, giving lectures, and living her day-to-day life, Caitlin Doughty has created another delightful book about death entitled Will My Cat Eat My Eyeballs?: Big Questions from Tiny Mortals About Death. [Yes, this is another book about death. I swear I'm going to space them out from now on.] While there is some rehashing of topics, Doughty manages to cover a wide array of interesting subjects like "What would happen if someone died with popcorn kernels in their stomach and then went into the cremator?" (I won't spoil the answer for you.) One of the best bits (in my opinion) was when she discussed different ways to dispose of remains like The Body Back which is a real thing developed for space travel. The premise is that if someone dies in space, this machine which is basically a giant robotic arm has the ability to shake the body (which has been freeze dried by the atmosphere of space) at such a speed that it's broken into small shards of ice. Heck yeah! Doughty also touches on burial laws and in particular those that concern pets. Are there pet cemeteries? Can you be buried with your pet? (Answer: It depends on your state and its laws.) Conclusion: A quick read that's a lot of fun to brandish on a crowded subway train during rush hour. :-P 8/10

What's Up Next: Disappearing Earth by Julia Phillips

What I'm Currently Reading: Round Ireland with a Fridge by Tony Hawks