I slept for 12 hours and I'm still tired: A Librarian Story 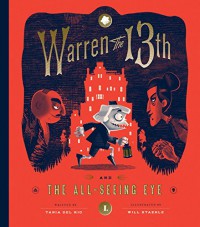 Warren the 13th and the All-Seeing Eye by Tania del Rio & Will Staehle is the first in a series about a little boy named Warren (the 13th Warren in his family) who has inherited his family's hotel which has seen better days. Warren is not only the inheritor but the sole bellhop, maintenance man, and everything in between. Our little hero is described (and brilliantly illustrated) as an ugly little toad of a boy but what he lacks in good looks he makes up for with a great character and lots of heart. His uncle who has taken over management until Warren is of age has little interest in the running of a hotel and has allowed the grounds and building to fall into disrepair but worst of all he has married a woman who treats Warren horribly. (And then we discover she's a witch with designs on the fabled All-Seeing Eye which has been a myth passed down through the generations of Warrens.) This book is saturated with fantastic illustrations with a really cool color palette (mostly red, grey, and black) and it's those well-executed illustrations which elevated the narrative and turned this book into a winner for me. I just picked up the sequel Warren the 13th and the Whispering Woods so we'll see if that holds true for the rest but for this one it's going to be a 10/10 from me.

What I'm Currently Reading: The Library Book by Susan Orlean