Batman is how old?! 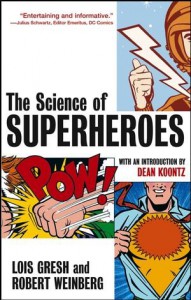 What an absolutely FUN read The Science of Superheroes turned out to be! Lois H. Gresh & Robert E. Weinberg took several big name superheroes like Superman, Batman, The Flash, Ant Man, Aquaman, and the X-Men (just to name a few) and discussed in-depth their powers, origin stories, narrative continuity, and whether there was any basis in scientific fact for their superpowers. There were great recommendations both throughout the book and in the footnotes (ya'll know I love a book with excellent footnotes). They also went to great lengths to give a detailed, thorough history of comics in general which made this an altogether well-rounded and researched book. (I've read some so-called 'scientific' nonfiction that couldn't hold a candle to the amount of work that Gresh & Weinberg obviously put in for this book.) Another huge bonus was the extensive appendix which also included biographies and q&a responses with several popular 'current' writers of comics. (Am I gushing? I can't help it that I love a good set of biographical facts organized in an orderly fashion.) At any rate, whether you're a pop culture fan, comic aficionado, superhero movie nerd, or really into researched footnotes this is sure to fit the bill and be an excellent choice for a cozy autumn evening. 10/10

PS I had made a note after reading this that I hoped they made one for comic book villains...and they did! If you're interested the title is The Science of Supervillains. XD

What's Up Next: Only Human by Sylvain Neuvel