Who runs the world? 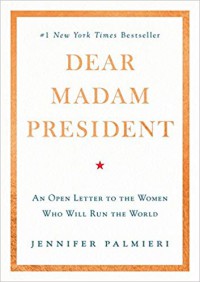 Dear Madam President: An Open Letter to the Women Who Will Run the World by Jennifer Palmieri is an empowering voice for women. It's written as a letter to the future female President of the United States (if you couldn't figure that out from the title). To give some background, Palmieri served as the White House Director of Communications under President Obama and then afterwards as the Director of Communications for the Clinton presidential campaign in 2016. Therefore, the reader will not be surprised that a large chunk of this book is devoted to behind the scenes of that campaign and its aftermath on herself and the country (from her point-of-view). From this standpoint alone, the book is interesting as we are seeing an event through the eyes of someone who actually experienced it from the inside. The overarching purpose of this book is to give advice and encouragement to women in any and every type of environment. Palmieri seeks to embolden women to allow for vulnerability and use the strengths that have historically been seen as weaknesses to launch yourself to the top. She emphasizes the importance of sticking up for yourself so that your voice is heard especially when yours is the only female voice in the room. (Did I mention this is quite a pro-female book? It is and I love that.) Remember: We cannot play by the same rules as men and we shouldn't have to. Personally, despite its shortness I think this is a necessary book for all peoples to read regardless of gender (but ladies ya'll should really try to seek this one out). I especially liked the book recommendations scattered throughout. :-D A solid 8/10 for me.