I started with book 3 of the CatStronauts series titled Space Station Situation which follows a team of cats in space. CATS. IN. SPACE. Is it any wonder that I started this series?! Picture a world where the entire population is made up of cats EVEN THE PRESIDENT (who is only concerned with his reelection I might add). In this installment, a meteor is headed toward earth and in order to track its progress and hopefully stop it our intrepid heroes must fix the Hubba Bubba Telescope. However, one of their crewmates has abandoned his post after a traumatizing solo flight around the earth in a spacesuit and the mission is sure to fail without him. (His name is Waffles by the way because of course all of the cats have names much like the cats we are familiar with in this reality.) The book is rife with funny puns and asides as well as excellent illustrations. I wouldn't class this as the best graphic novel I've ever read but I liked it well enough to give another book in the series a shot. 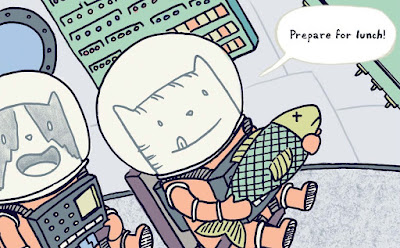 I think this is from an earlier book in the series but I don't care cause LOOK. [Source: nerdophiles]

What's Up Next: CatStronauts: Robot Rescue by Drew Brockington