The examination of others that leads to the self 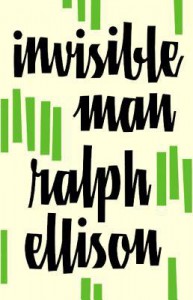 Invisible Man by Ralph Ellison is another title from the list of 100 books compiled for the Great American Read. (Have you voted today?) I feel somewhat chagrined that I had never heard of this classic until I checked out this list. The reader follows a nameless narrator who tells the story of his days in college while living in the South to his move to New York City. As this is set in 1930-40 the racial/social divide is still quite stark even in the North and the author doesn't pull any punches in that regard (i.e. expect violence). The beginning starts out with our narrator underground and in hiding although we have no idea why. In explanation, he weaves a story full of brutality, bigotry, backstabbing, and political machinations. He leaves college and goes to NYC where he is recruited into the Brotherhood which purports to strive for equality among all men regardless of race. Events unfold quickly and he fully believes and embraces the cause. The fomenting of racial riots are underway in Harlem (his district) and at this pivotal moment he is pulled out of his district and sent on another assignment downtown. The reader is kept on their toes and always wondering (as the narrator is) just which side is the "right" side and what is truly motivating the men he has come to trust in this (to him) foreign city. What is the "true" self and how does one embrace it? Invisible Man chews this question over while telling a story of one man coming to terms with the racism (both overt and covert) of society which is told so convincingly that you'll forget it's a work of fiction at times. This is a dense book and took me far longer to read than I expected. Several interesting points were made and quite a few powerful passages but overall it doesn't rate higher than a 6/10 for me.

A compelling and thought provoking point:

"For history records the patterns of men's lives, they say: Who slept with whom and with what results; who fought and who won and who lived to lie about it afterwards. ...only those events that the recorder regards as important that are put down, these lies his keepers keep their power by." - pg 439