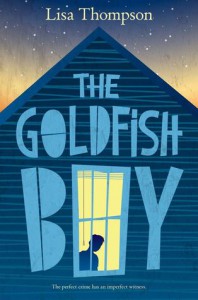 If you read The Trouble with Goats and Sheep (or at the very least my review of it) then you won't be surprised to learn that I thoroughly enjoyed The Goldfish Boy by Colleen Oakley. The bare bones of this book is remarkably similar in that it's centered on a cul-de-sac in England where there are secrets behind every door and there's a mystery involving the disappearance of a small child. Yes, they're remarkably similar except...the main character is a young boy named Matthew who suffers from a debilitating case of Obsessive Compulsive Disorder or OCD which has resulted in him being unable/unwilling to leave his house. He is hyper-observant of everyone's movements and takes detailed notes which is how we get to know all of his neighbors. The majority of the novel takes place in his bedroom where the reader is trapped right along with him. Besides the discussion of OCD, Oakley tackles the internalized shame and fear of living with a mental illness. This is written in the style of Rear Window where the reader is seeing through the eyes of someone who is on the outside but also very much on the inside. (I'm deliberately being vague because to be anything else would give away the mystery.) This book made me wonder how common OCD might be in children and how this could be misdiagnosed as agoraphobia or vice versa. (Wait til you see how Matthew's parents view his behavior.) I felt that the author was extremely sensitive in her handling of this debilitating illness and wrote about it with just enough detail for us to feel as if we were getting a glimpse inside of Matthew without beating us over the head with it. Of note: I didn't much care for any of the adults in this book. Far and away, they were all pretty much useless cretins. The book though was riveting and I immediately passed it on to my co-worker who then passed it on to her teenage daughter. That marks it a winner in my books. 10/10

What's Up Next: Close Enough to Touch by Colleen Oakley