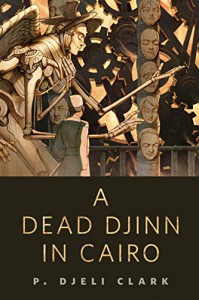 I'm not entirely sure why I haven't heard of Tor before but it's a fantastic website for fans of sci-fi and fantasy. They have tons of original fiction, art, and community discussions on topics related to these genres as well as those which influence them (I'm talking science, people). It's pretty excellent. (I'm not being sponsored by them. lol) Well, once I discovered the site it was pretty much all over for me. My first foray was into a piece of short fiction under the science fiction/alternate history heading titled A Dead Djinn in Cairo written by P. Djeli Clark and edited by Diana Pho. This follows the story of Fatma who works for the Egyptian Ministry of Alchemy, Enchantments, and Supernatural Entities as a special investigator. She's called onto the scene of a grisly murder where she finds more questions than answers. Her investigation leads her to discover hidden plots, nefarious foes, and a giant timepiece (not a euphemism). Fatma is a hardcore female protagonist who makes no apologies for being the best at what she does. It's all the best elements of fantasy and sci-fi combined in a setting where one wouldn't necessarily expect to see female extraterrestrials kicking major butt. Oh and did I mention that there are angels? If you're interested in trying out sci-fi but you're not sure what particular niche you're into then Tor is a great place to check out. Maybe try A Dead Djinn in Cairo and see where that takes you. :-D As for me, this is a 10/10.