A love letter to libraries 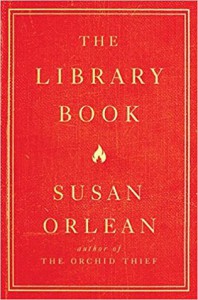 Right after I joined the library where I'm currently working the (now retired) Library Manager gave me an ARC (Advanced Reader's Copy) of a book that he said I'd "really like". Since we had known each other less than a week I took it at face value and slipped it into my desk drawer. Three months later and this book (now in published form) was returned by a patron who told me that it was one I just had to read. This recommendation coupled with the fact that the book still has several hundred people waiting on hold to read it made me dig back in my drawer for my copy. Almost immediately I started drafting an apology letter to the man who saw me coming from a mile away.

The Library Book by Susan Orlean is a love letter to literature, librarians, and most especially to libraries. The book begins with a brief glimpse of what happened on April 29, 1986 and one of the (alleged) main characters. This is a bit of a teaser to the mystery explored in the book but in my opinion the next chapter is the real heart of the book. Orlean takes us back to when she was a young library patron who had a special routine of visiting her local library with her mom and the visceral reaction she had many years later when entering the Los Angeles Central Library with her own son for the first time. During a tour of the historic building, she learned of the devastating fire that occurred there on April 29, 1986 and how the man accused was never charged. Hundreds of thousands of materials were either outright destroyed by the blaze or damaged by the smoke or water used to douse the flames. The cost to repair and replace these items (as well as repair the building) was in the millions and it still holds the record for the largest library fire in U.S. history. Orlean was intrigued by the crime and why no one was brought to justice. She spent 4 years tracing back through the history of the public library in Los Angeles (including all of the City Librarians) before she fully delved into the one and only suspect, Harry Peak, an aspiring actor who boasted to friends that he had been there on the day of the fire and more importantly that he was the one that set it off.

If you're not particularly interested in the fire or the whoddunit aspect there's plenty more here to sink your teeth into because Orlean goes behind the scenes of the library to talk about its various departments, infrastructure, and ultimately what it's really like to work in a public library. She covers such topics as holds fulfillment, collection development (like what to do with hundreds of maps), working with the homeless, and working within a tight budget to bring programs to the masses. I took copious notes after reading this book but looking back I realize how the majority of them would completely spoil this book for you. As I went in totally blind (and loved every moment of it) I think you guys would benefit by doing the same. Try and get your hands on this one but be aware that you'll probably be waiting for a while to get it from your local library.