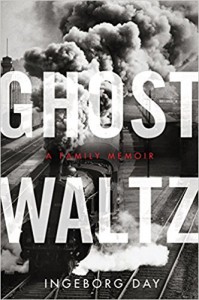 I read Ghost Waltz: A Family Memoir by Ingeborg Day on recommendation from a patron. She assured me that I would love it and that it was right up my alley as it was a nonfiction book that covered events from WWII. What hooked me into reading it was that it was covering the events of WWII from the perspective of someone who was on the 'other side' aka the Nazi perspective (as opposed to the 3rd person nonfiction narrative or survivor memoir). Ingeborg wanted to uncover the secrets of her father's past and hopefully work out exactly what his role was as a member of the Nazi Party and SS. She revisited old memories of times spent living in shared accommodation with other families, rationing, and the charged silence around the dinner table. She continually reiterated that she had no memories of her parents ever saying anything about Jewish people or showing any violence whatsoever toward anyone...and yet the undertones of the book were very anti-Semitic. I honestly found this a very uncomfortable book to read especially considering that she seemed to vacillate on her own beliefs and feelings towards those who were slaughtered en masse while her father served as a member of the Nazi party. (Her conflicting beliefs made this a very disjointed read.) For those interested in knowing just what his role was and his innermost beliefs, you will be sorely disappointed. There is no clear cut conclusion to be found among the pages of Ghost Waltz. The author herself couldn't seem to work out her own feelings much less those of a man who she had no contact with as an adult (there was an event after she left home which led to a rift). This wasn't my favorite read of the year for multiple reasons but mostly for those stated above: anti-Semitic sentiment and unsatisfactory conclusion. It's a 2/10 for me. :-/